1.On March 13, 2021, among students of higher educational institutions of Kazakhstan, the city debate tournament ” 30 years of Independence ” was held. The event was held in the cities of Almaty, Shymkent and Nur-Sultan at the same time.
The tournament was organized by the National Debate Federation with the support of the Head of State Academy and was held in two languages in the format of the American Parliament and Lincoln Douglas.
The debate turned out to be tense and interesting. KAZGUU School of Liberal Arts’s students and members of the organization “Orda manufacturing company” showed their skills, knowledge and resourcefulness.

According to the Lincoln Douglas format, Aiym Aitpanbet took the 1st place and was recognized as the “Best Speaker.”
We sincerely congratulate the students of KAZGUU School of Liberal Arts on their victory! 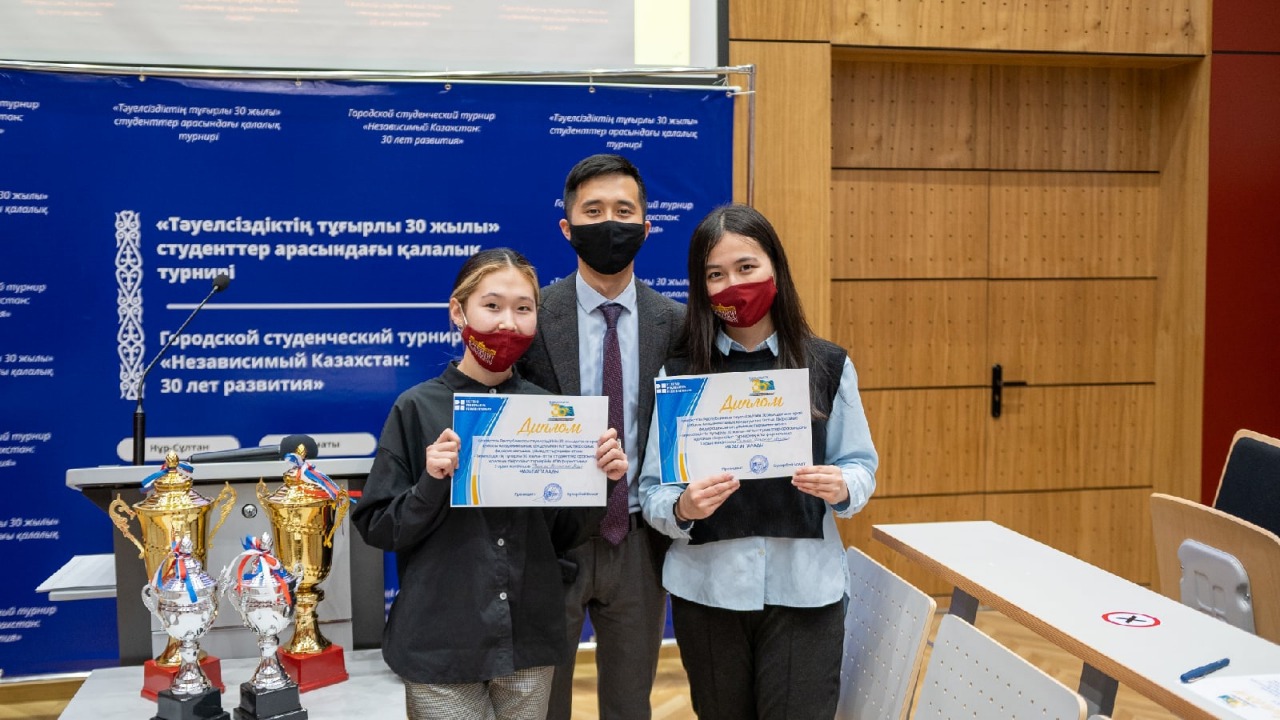 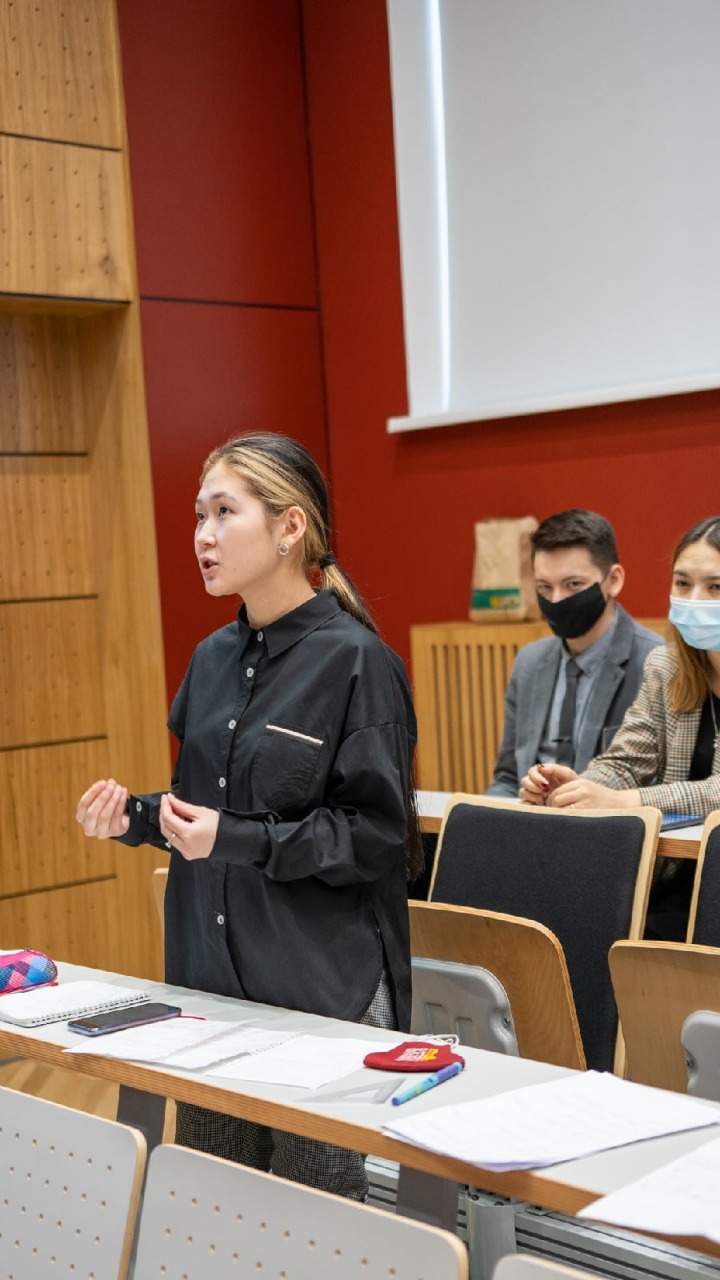 English is now available to everyone! M. Narikbayev KAZGUU University has announced its first speaking club called “KAGUU. TEA. TALK». The social project is aimed at improving the language skills and strengthening the practical ability to hone these skills.

The teaching methodology within the framework of this project is based on a communicative approach, which provides students with an immersion in real situations of communication and interaction in English.

In addition, this course includes best language practices based on the educational programmes of Cambridge English, Macmillan Academy, National Geographic Publishing, Pearson Education Ltd, Oxford English, which are known worldwide for their quality and results. The experience of the teaching staff also plays an important role in successfully achieving the goal of this project. The course is conducted by professionals with foreign education gained at the best universities of the world (Cambridge University, Newcastle University, Leicester University, etc.) and holders of such international certificates as CELTA, TKT.

According to Anar Ibrayeva, the Director of School of Liberal Arts, today knowledge of English allows to expand the horizons of opportunities and helps to advance in the careers.

“This project is aimed at live communication, when each member of the club will be involved in an active conversation and discussion of the proposed topic. Many feel constrained and sometimes even afraid to express their thoughts, our instructors will be able to help improving the conversational skill and involve everyone. We feel social responsibility for those people who have limited access to quality education, because knowledge of English opens up access to modern information resources, since the vast majority of books and scientific articles of world importance are published in English, “said Anar Ibrayeva.

Participants who attended all classes of KAZGUU TEA.TALK in 2020 received a certificate of a participant in this project. A large number of professionals from different regions of the country participated in the republican competition organized by the National Innovative Research Centre “BILIM-ORKENIETI” with the support of the Ministry of Education and Science of the Republic of Kazakhstan and the Republican Scientific and Practical Centre “Daryn.”The winners were identified on the basis of certificates confirming the qualification of pedagogical skill, biography, with the indicated dates of work in education, and the results of educational activities.

Following the results of the conference and the award, a collection of essay materials was released, which describes the teachingmethods used by contest winners.

We sincerely congratulate Azhar Zekenova on the victory! 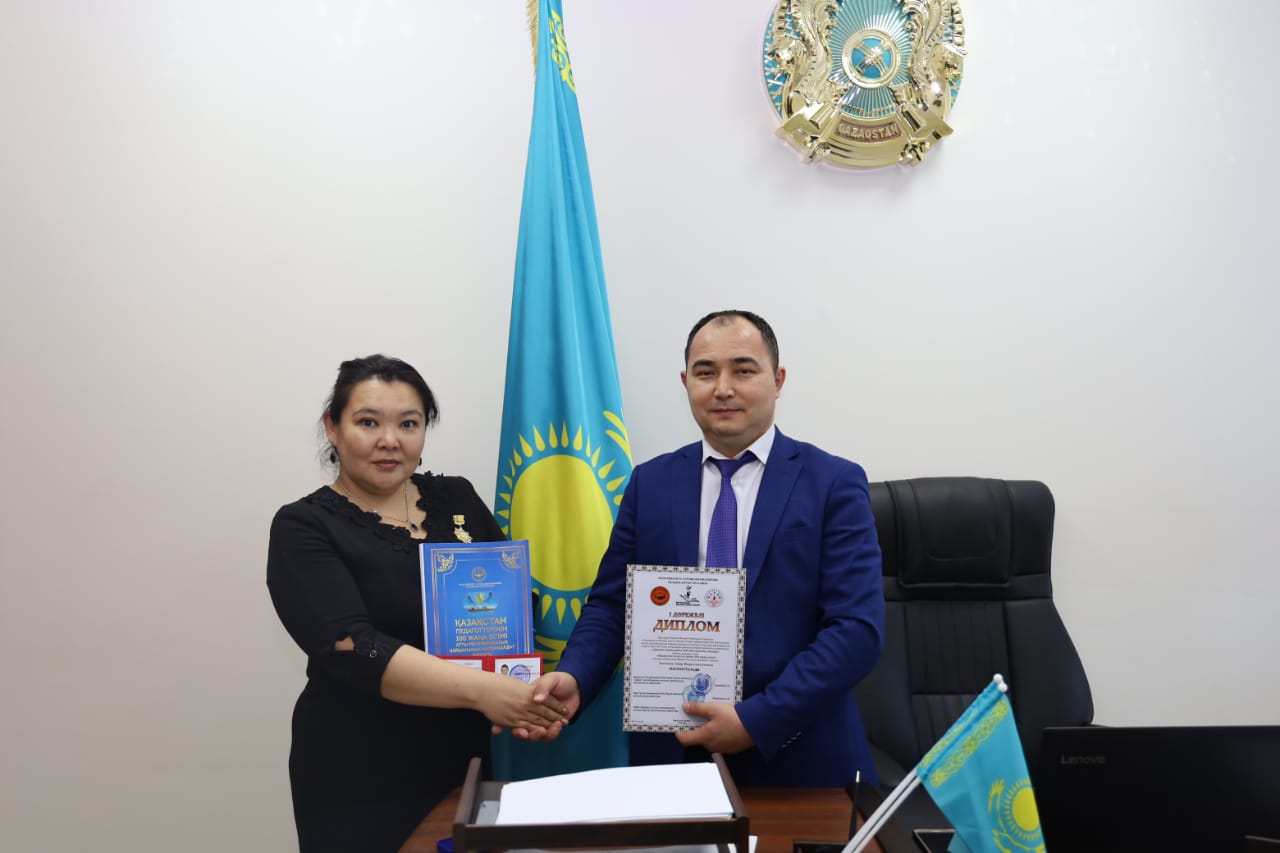 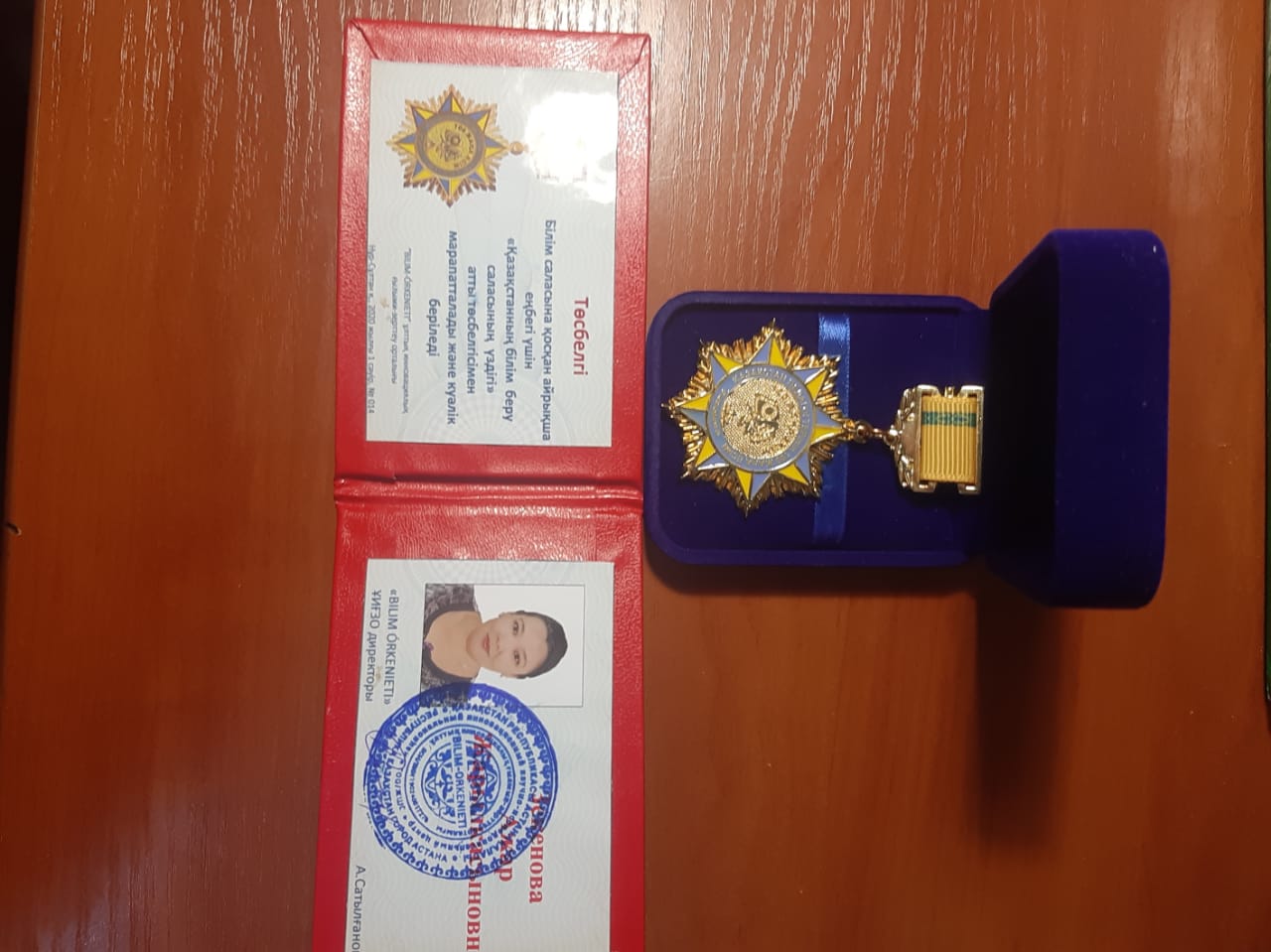 4. From March 30 to 31, 2021, at the department on the basis of the Institute for Digital Economy Research of the Karaganda University named after academician E.A. Buketov, the II International Distance Olympiad in the specialty “Tourism” was held.

The competition was attended by 27 teams (108 participants) from 🇰🇿 🇷🇺 🇧🇾 ☝🏻

In accordance with the final result, the “Travel Marvels” team consisting of students of the specialty Tourism of KAZGUU University:
Abilhay Zhansaya
Arnabek Zhanarys
Erkin Tikenov
Head of the team: Mukhamedzhanova Raushan
took the 3rd place. 🥇🥈🥉 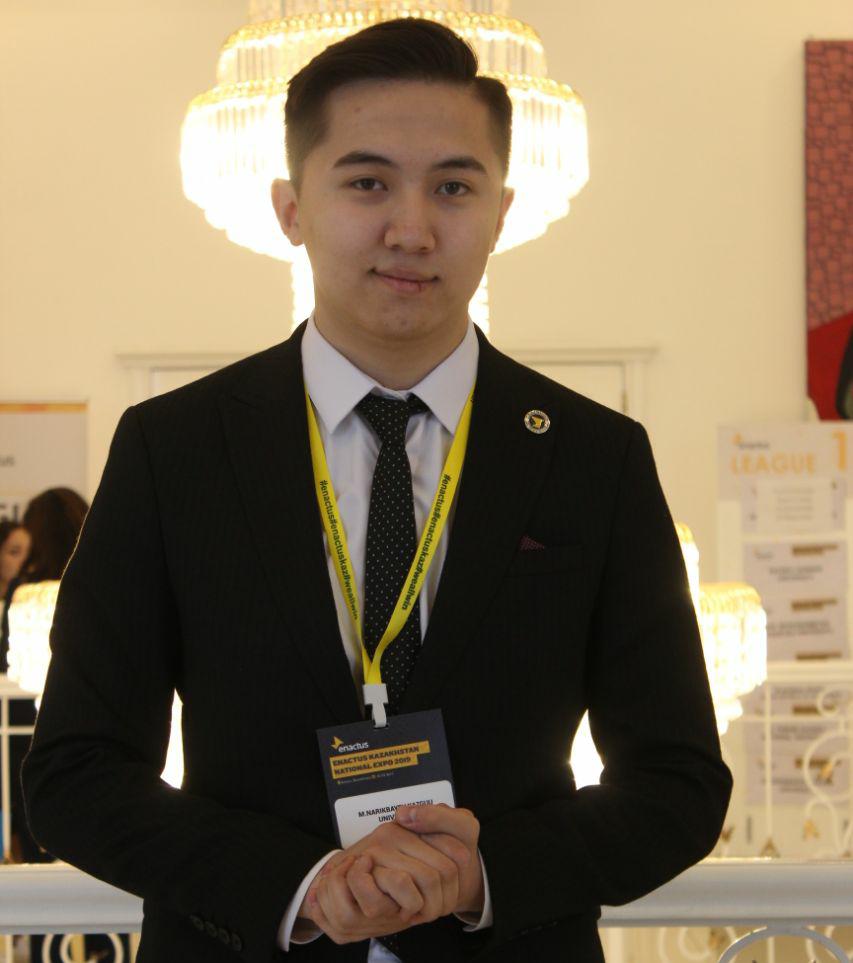 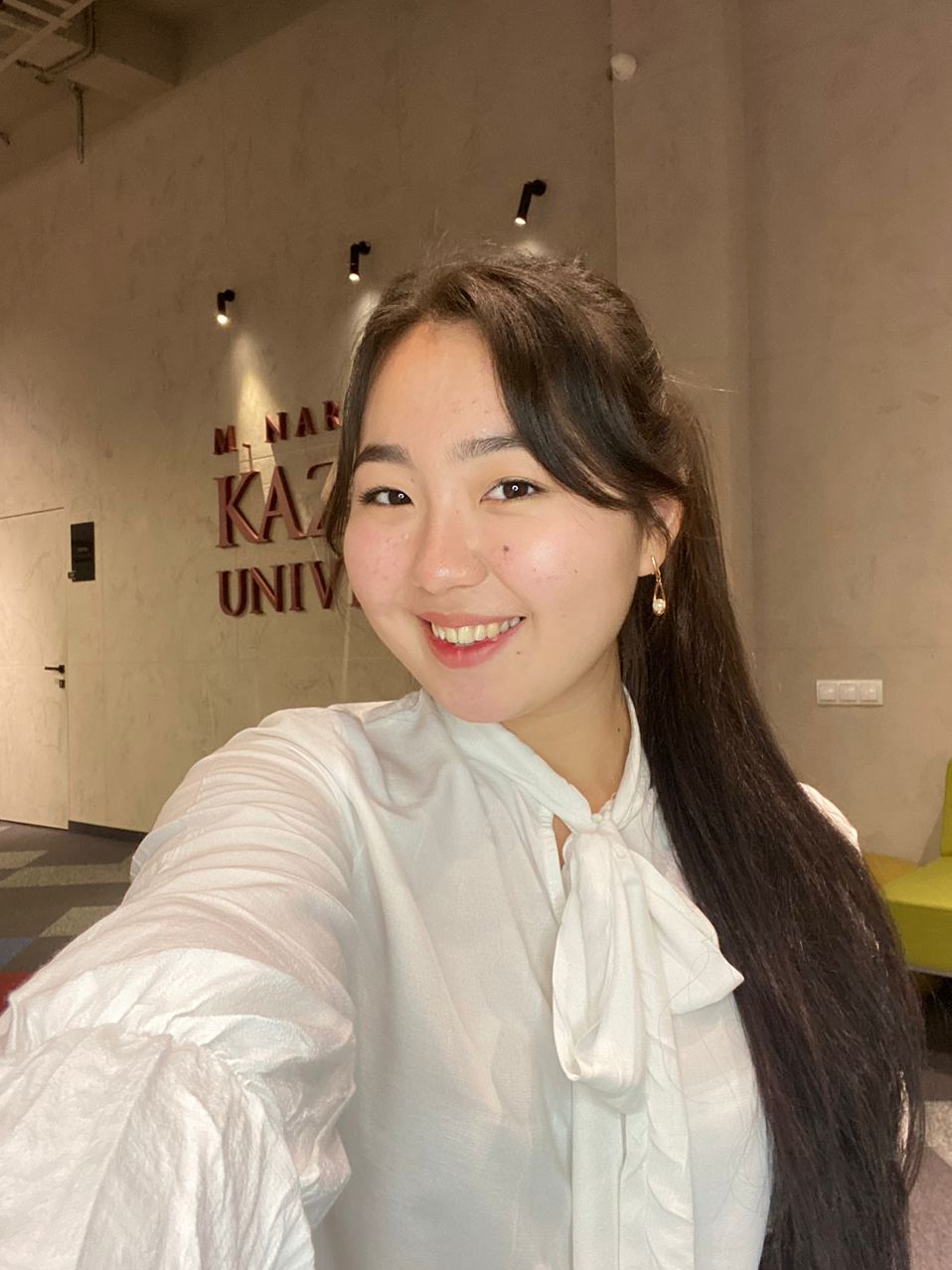 5.We sincerely congratulate the instructor of KAZGUU School of Liberal Arts Aliya Sarsenbayeva with receiving the international certificate CELTA!

CELTA (Certificate in English Language Teaching to Adults) is widely accepted international certificate issued by Cambridge ESOL, which is recognized in many countries of the world.

Candidates successfully completing this course have great career development opportunities in the field of teaching all over the world. 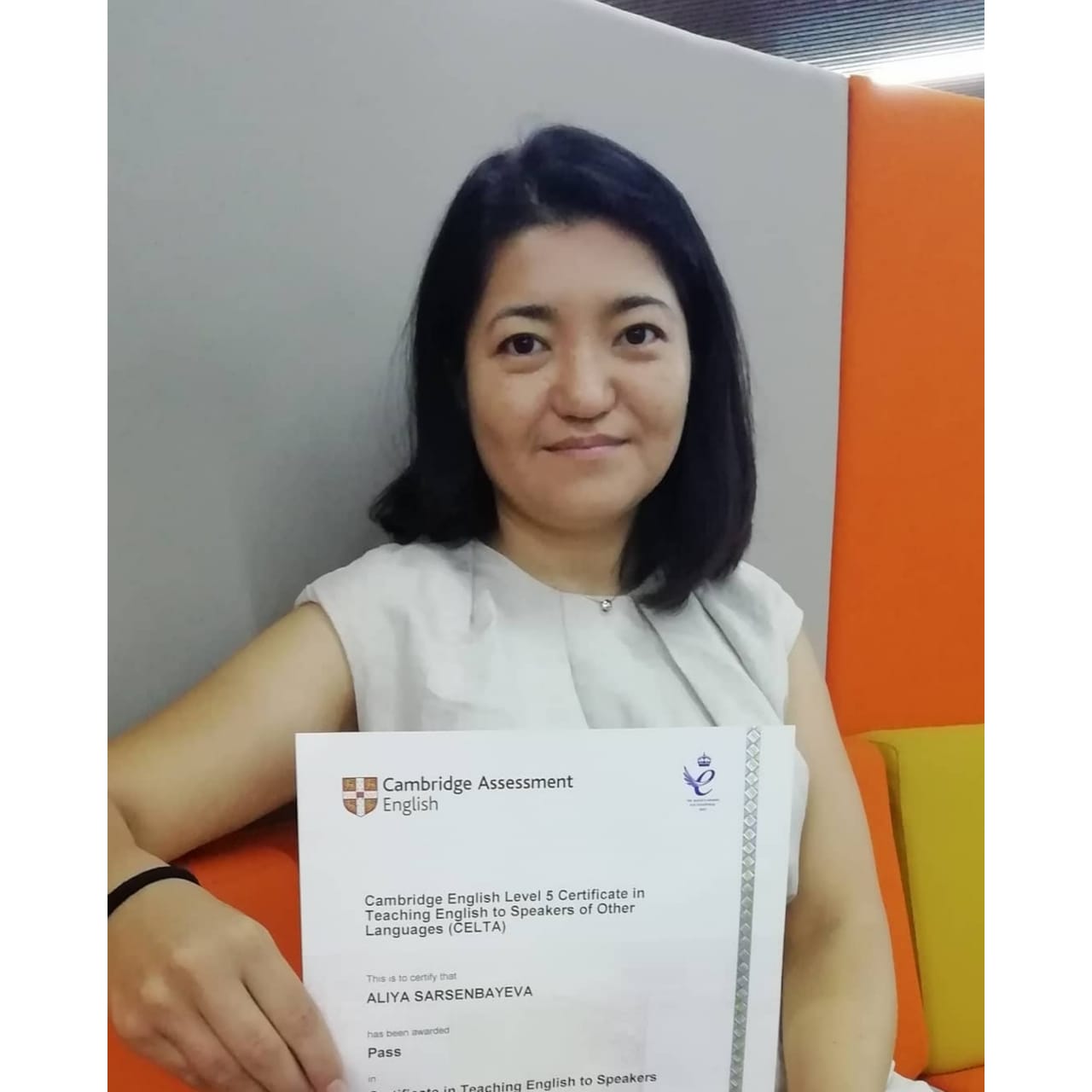 6.Sanat Kazhgaliyev, first-year student of M.Narikbayev University, majoring in International law, participated in the student essay competition of D.Khodorkovskiy Siberian State University “Modern youth in the changing world” and took first place under the supervision of Indira Akylbayeva, academic professor of the School of Liberal arts. Inhisessayhe used the ideas obtained during the course Philosophy: Global perspectives and identity.

The topic of his essay was “Morality formula of Kazakh thinker Abay Kunanbayev “Adam bol (Be a human)” in the system of values modern youth”. Indira Akylbayeva provided consultation to the essay writing process and facilitated Sanat’s participation in the contest.

Honesty, justice and unity are the main ideological components of the “Philosophy: Global perspectives and identity”. During the course, students study and compare various philosophical schools of thought and analyze them comparing and contrasting with the values reflected in kazakh philosophy.

In his essay Sanat underlines the importance of obtaining a quality education by stating: “Integrating the wisdom of khakim Abay in our times, it is important to speak Kazakh and English languages. The more languages you know, the more opportunities for realization you have. As author puts forward, knowledge and enlightenment are beneficial, it opens the way for world culture, spiritul and moral wealth, art. Path to knowledge is hard, only honest and rational hard work can bring you to success. At the same time, Abay shows the other side of the human nature – laziness as evil, which slows down the process of knowledge gaining, which is hard to disagree.”
Student adds “if you won’t fight the laziness as manifestation of illiteracy, you can’t realize yourself as a personality, thus your duty as a citizen of the county will not be completed. Desire of the youth to become a professional and generate value for society enacts them for decisive actions.”
We congratulate Sanat Kazhgaliyev with his victory in the competition and successful completion of the “Philosophy: Global perspectives and identity” course.

7.First-year student Konilimkos Rakhymbek won the first place for his work on “Identity of Alash nations on Eurasian space” presented on international research conference in the History section “Major problems of historical science: new vision and perspectives”.
Congratulations on victory! The international conference had 72 participants (undergraduate and postgraduate students) from different countries. 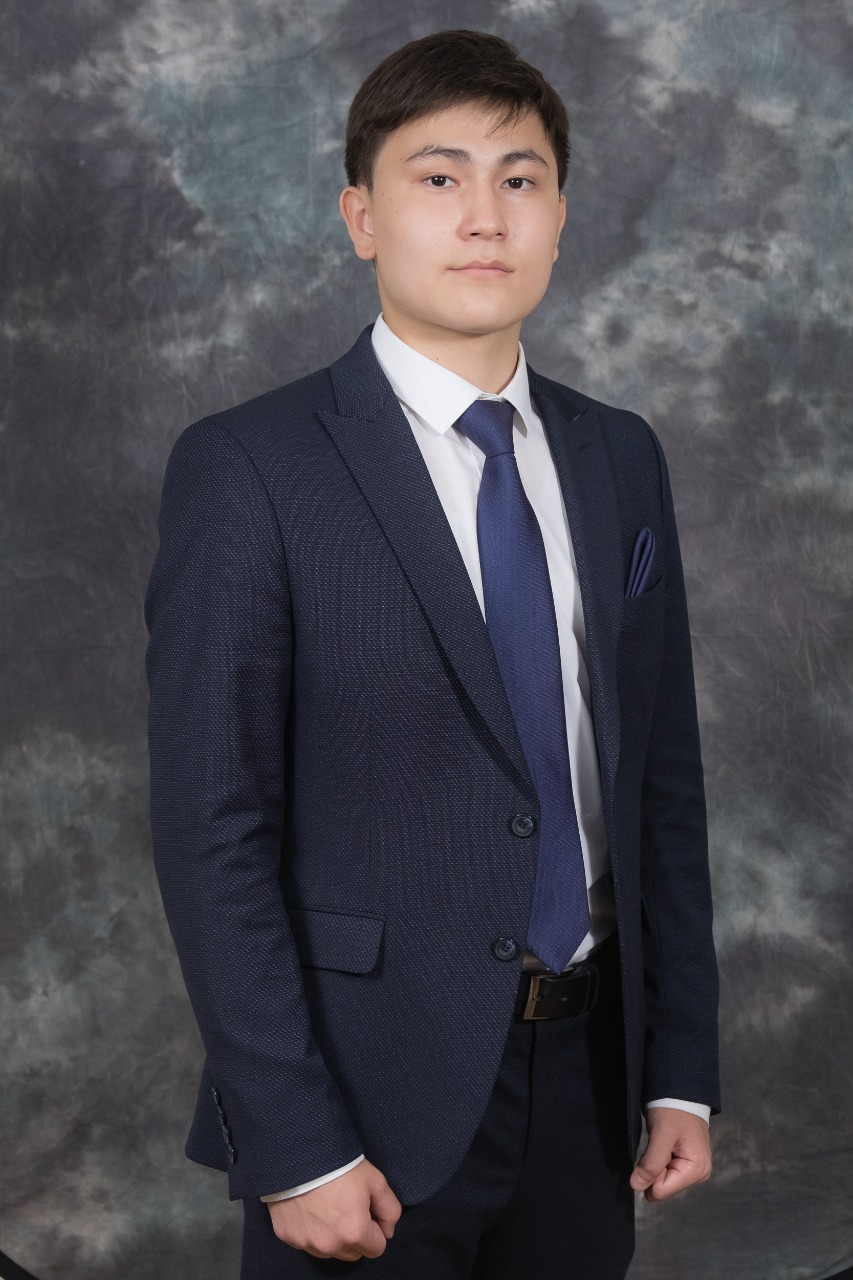 8.Upon completion of the Kazakh Language course, students have an opportunity to confirm their level of knowledge by passing the QAZTEST certification. This opportunity is possible due to the cooperation between M.Narikbayev KAZGUU University and National Testing Centre.

Teaching different levels of Kazakh Language was implemented at the university 5 years ago. It’s efficiency is supported by high qualification results and QAZTEST certification.

✅ applytopublicservicevacantpositionsoftheAcorpus;
✅ apply to international Presidential scholarship “Bolashak”;
✅apply directly to the National Security Committee of the Republic of Kazakhstan;
✅ apply to vacant positions of other organization and companies. 9.Our congratulations to Kanat Temirlan, first-year student of M.Narikbayev KAZGUU University with winning the first place on a National competition “White Path of Alash in the XXI c.”. We would also like to express our gratitude to Merueyert TLebaldiyeva, Senior Lecturer of School of Liberal Arts who prepared Kanat for this competition in the frames of the Contemporary History of Kazakhstan course.

Contest had 3 stages in 4 different nominations (in Kazakh, Russian and English languages) and had 117 participants from Kazakhstan and other countries interested in the history of the Alash movement.
The main aim of the event is to study and dissemination of the political experience, economical positions and spiritual legacy of the Alash movement in the context of modernization of the contemporary Kazakhstani society.

Kanat Temirlan presented a topic of “Alash movement and national brand” which granted him the first place and amoney certificate. It should be noted that the competition was rough, since the competitors were the students majoring in History, whereas Kanat is a student studying Law Enforcement.
The competition was held by “Ak zhol” political party on the basis of L.Gumilyov Eurasian National University on December 14, 2019. 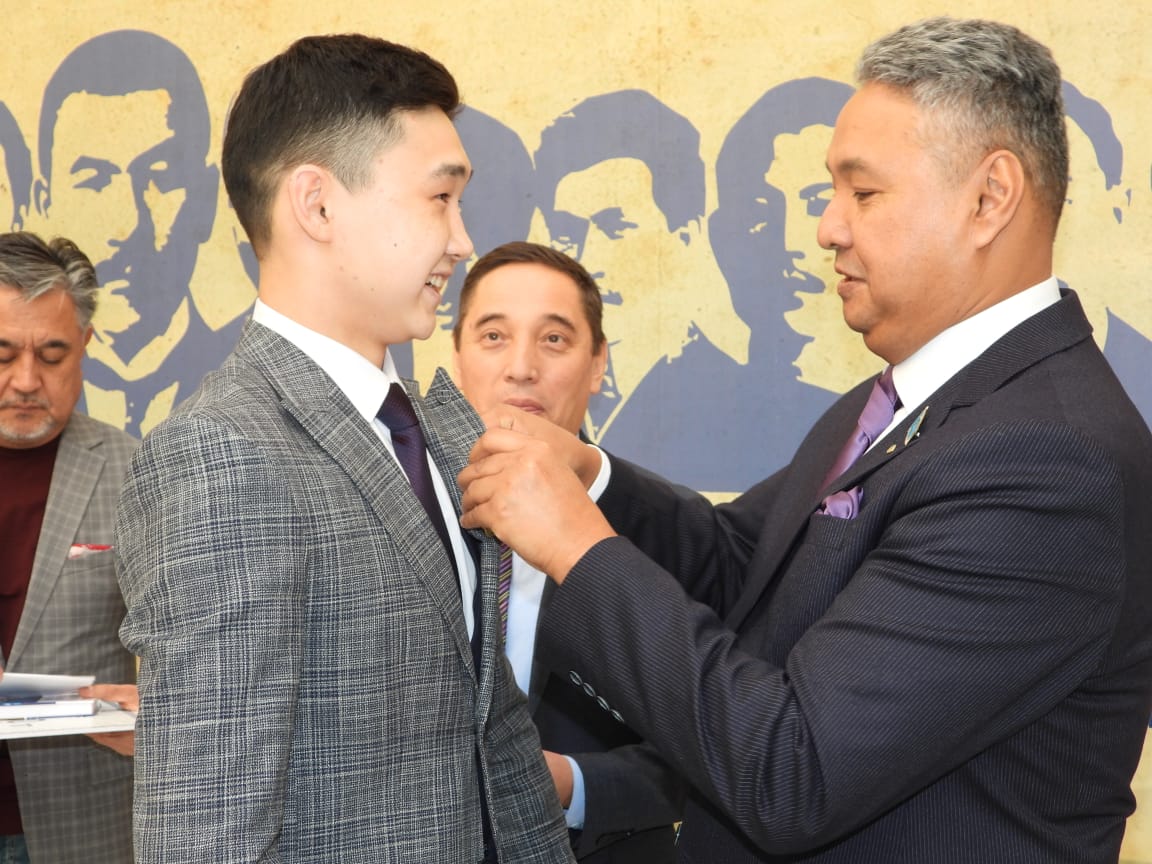 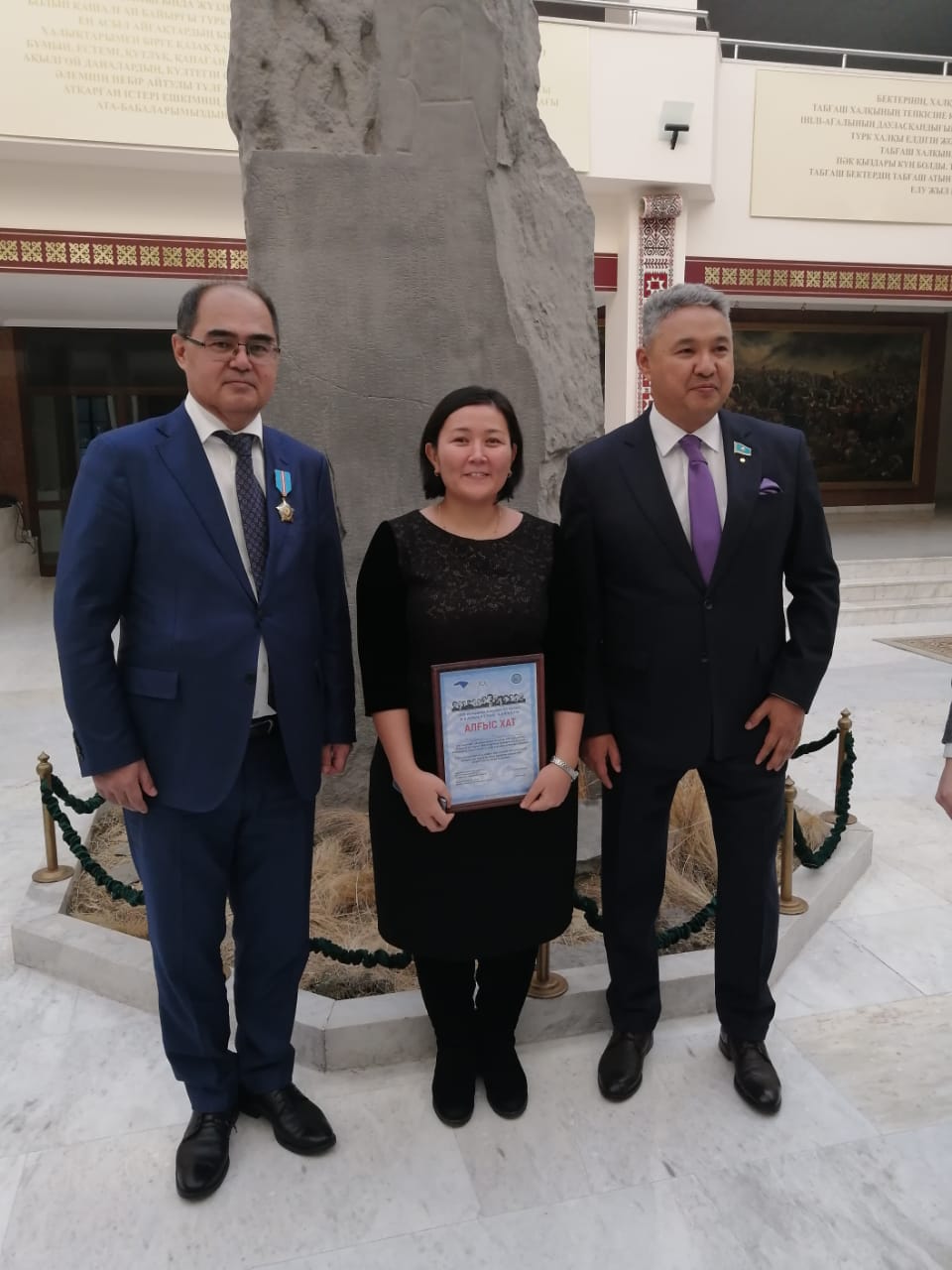 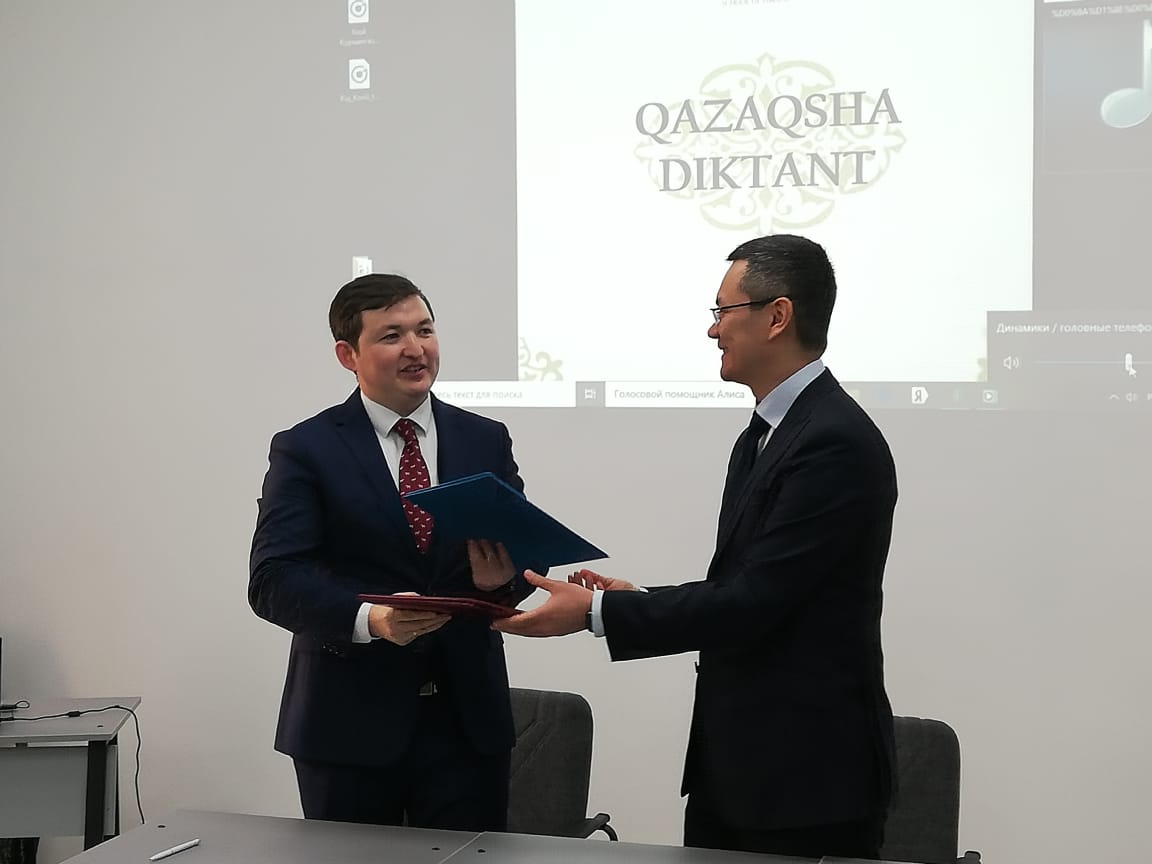 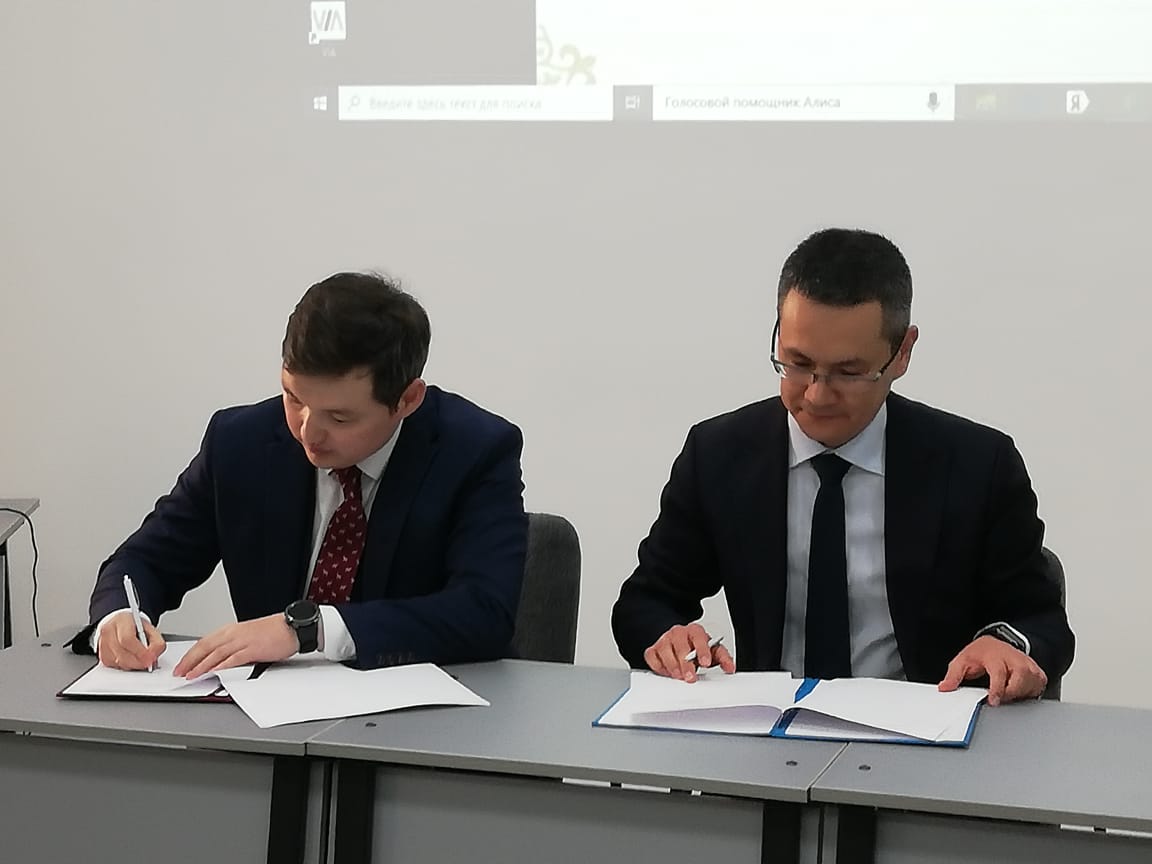 11.Professor of the the Radbaud University Dr. Wim van Meuer visited the KAZGUU School of Liberal Arts.
The visit was organized with the support of the Embassy of the Kingdom of the Netherlands in the frames of the NUFFIC initiative. Dr. Wim van Meuer had a short meeting with the top-management of the school and gave a guest lecture on the topic of Strategies and challenges of European Union.
During the lecture students had an opportunity to ask questions regarding the structure of EU and various processes of integration.
We would like to express our deepest gratitude to the Ambassador of the Kingdom of the Netherlands Mr. André Carstens for an opportunity to have a guest lecture in our university. 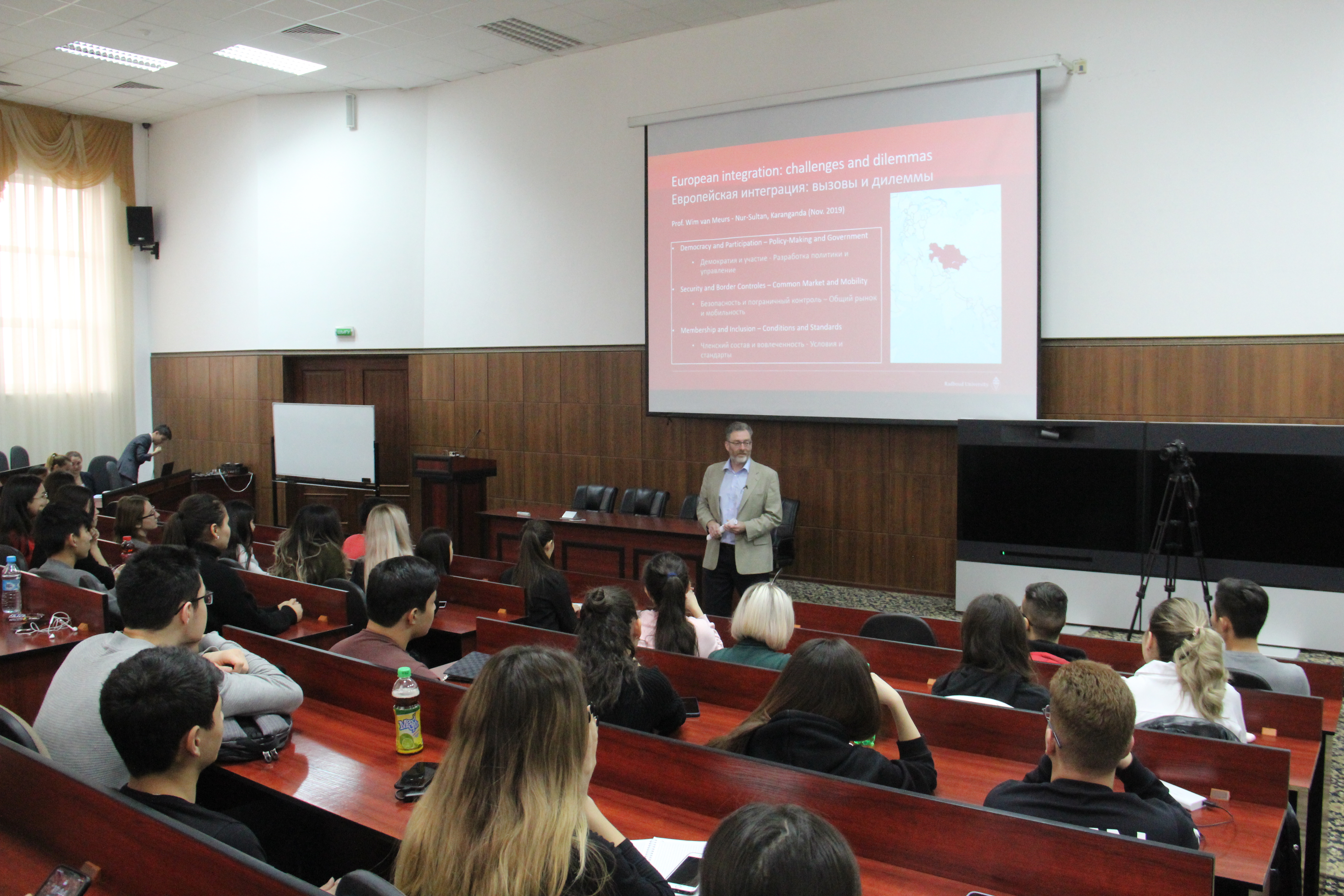 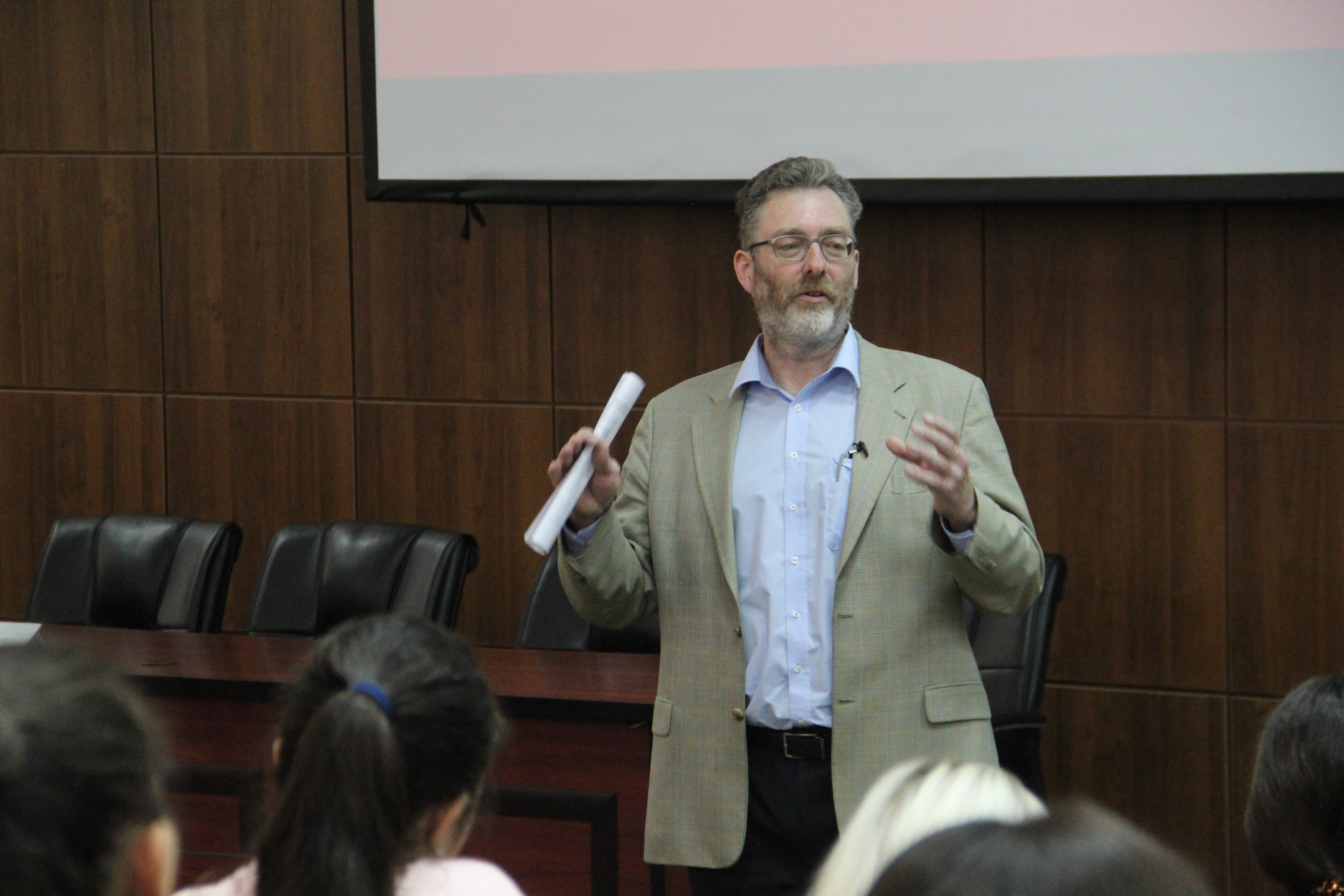 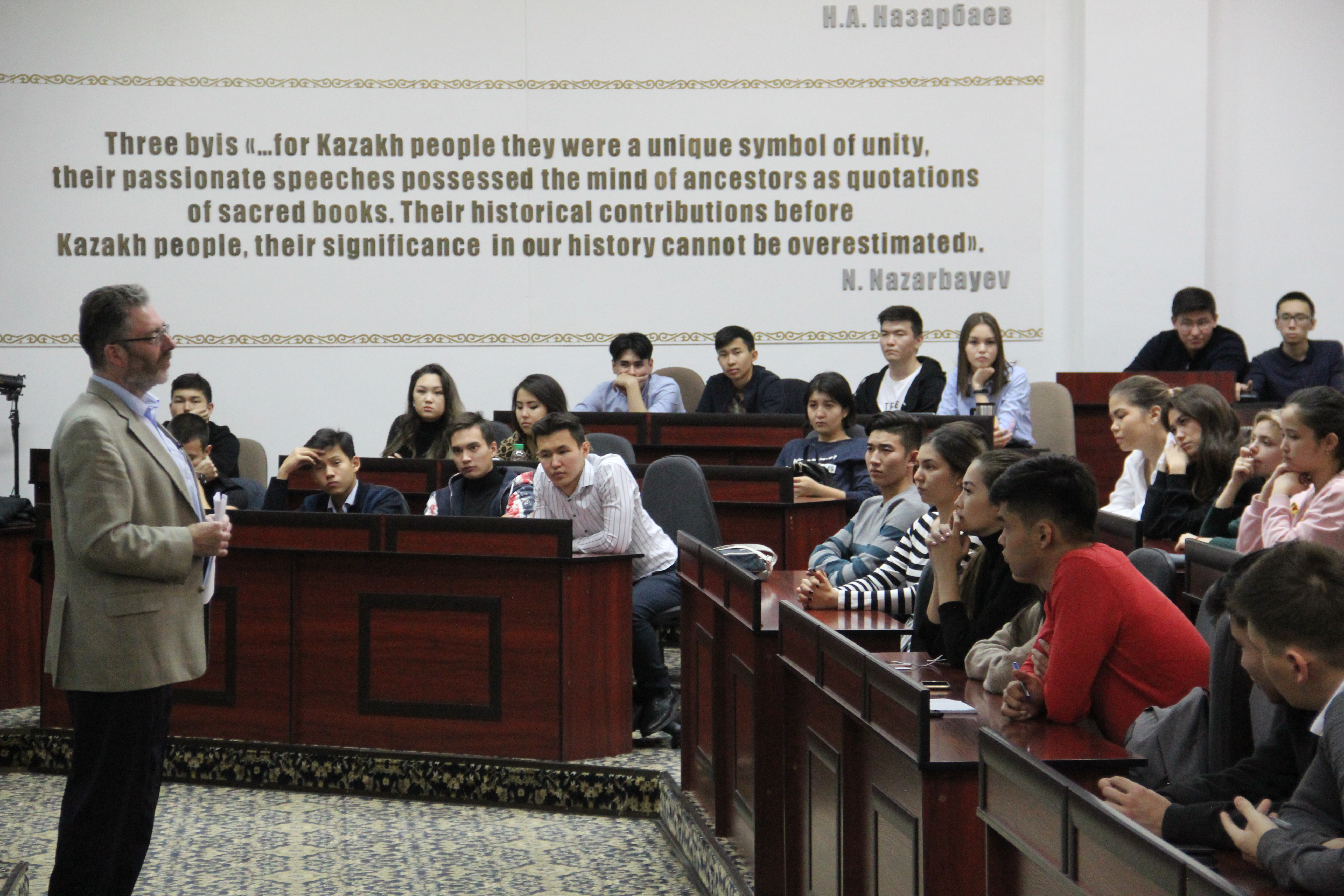 12.We are happy to announce that M.Narikbayev KAZGUU University has been awarded the status of Cambridge Assessment English Official Exam Preparation Centre that confirms its high quality of English language teaching and compliance of educational programmes with international standards in preparation for Cambridge exams.

Why to choose Cambridge English Qualifications:

➡️ to confirm the level of English language proficiency A2 KET, B1 PET, B2 FCE, C1 CAE;
➡️ to enter any of the world’s leading 25 000 educational institutions;
➡️ to participate in academic mobility programmes;
➡️ to undertake internship in a foreign company.

☝️ Besides, Cambridge certificate has no expiration date and is recognized by leading universities and organizations around the world. 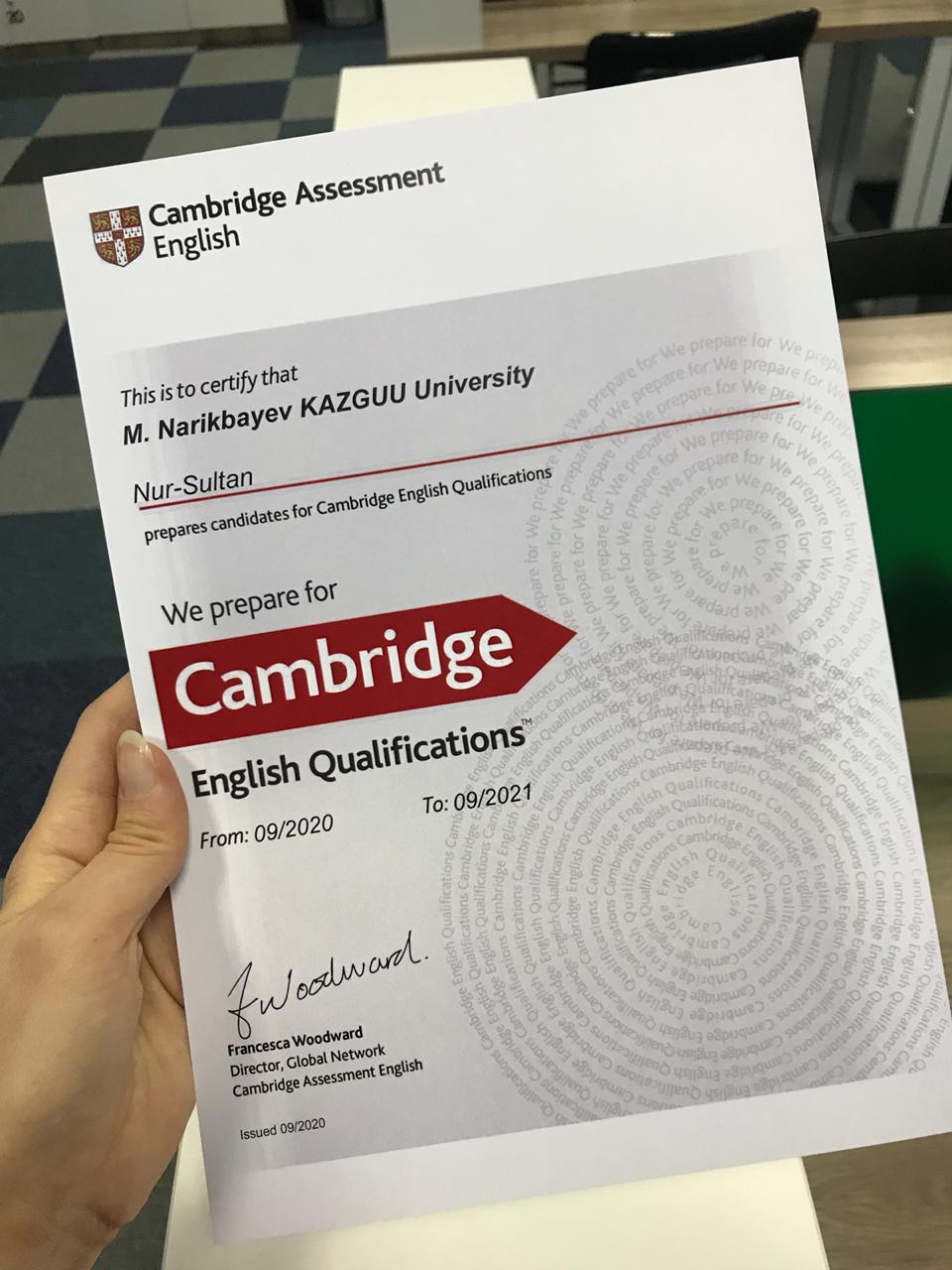 13.We sincerely congratulate the instructors of General Education School Elena Tselenko and Aliya Sarsenbayeva with receiving the international certificate CELTA!

CELTA (Certificate in English Language Teaching to Adults) is widely accepted international certificate issued by Cambridge ESOL, which is recognized in many countries of the world.

Candidates successfully completing this course have great career development opportunities in the field of teaching all over the world. 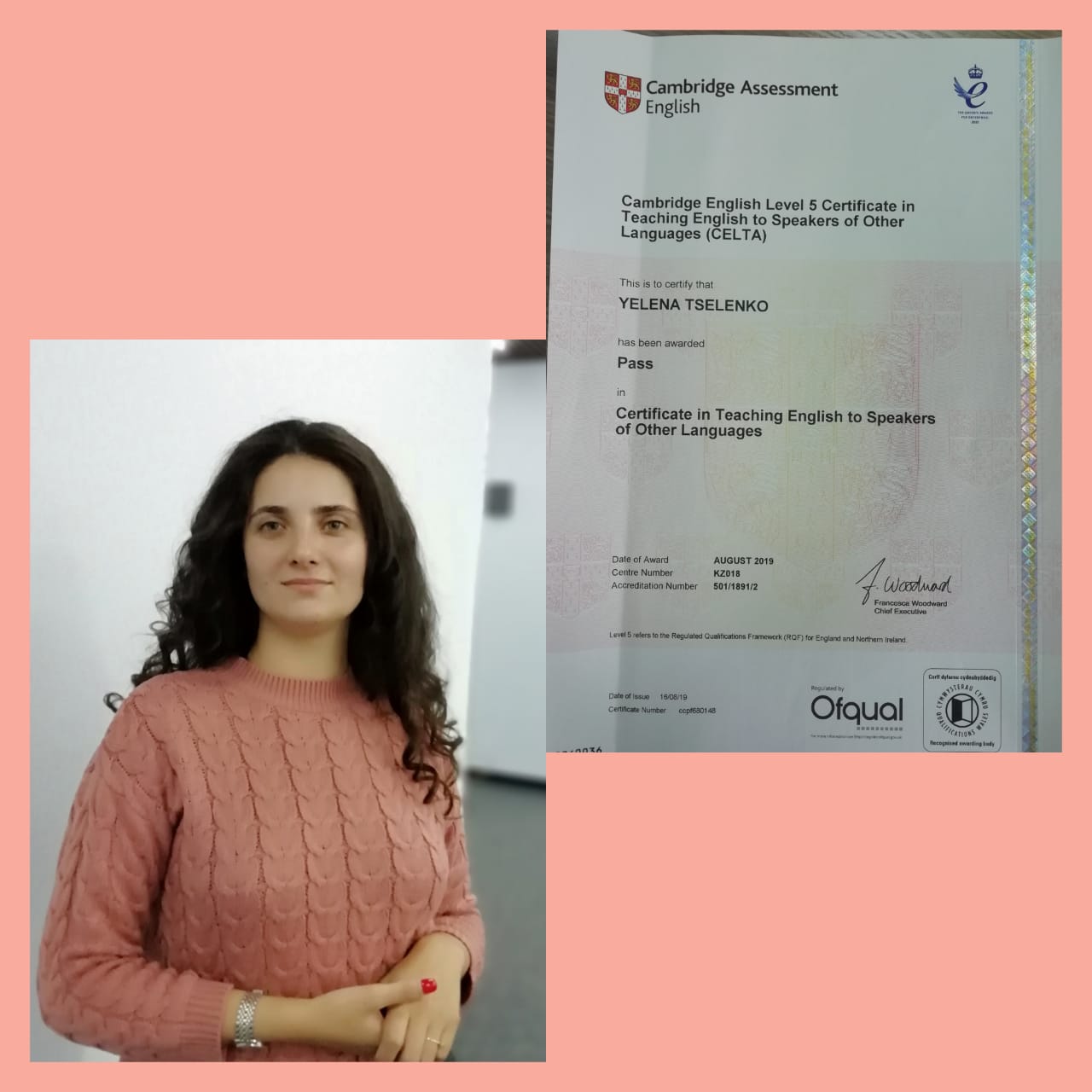 15. The student Novinskaya Yana took the 1st place in the Republican competition “Abay’s readings”, dedicated to the 170th anniversary of a great Kazakh writer held in Karaganda (Kazakhstan) (2014-2015 academic year); 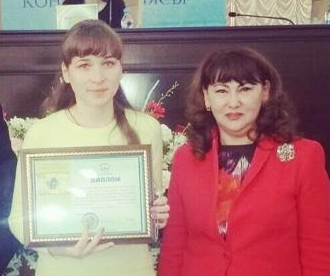 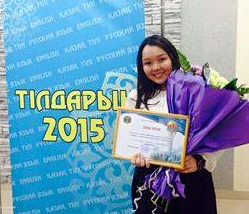 17. Ibragimov Dzhambulat, the student of group M-114 (R), took the 1st place at the International tournament “Cup of Eurasia” Kyokushinkai karate, it was held in Barnaul (Russia) (2015-2016 academic year); 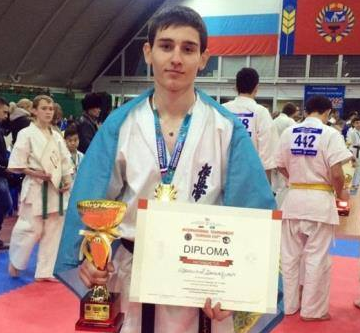 18.The students Niyazov Galymzhan, Abdugaliev Syrymbet, Erzhan Aray, Aimenov Nurken were awarded the nomination “The Best 1st year student – 2015” at the city dedication to the students in Astana (Republic of Kazakhstan) (2015-2016 academic year); 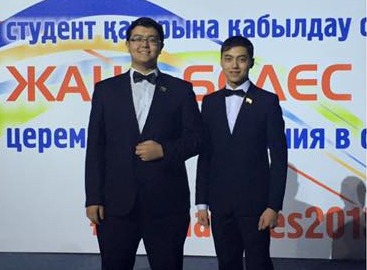 How to Apply Achievements Scholarship and Discounts Students’ comments